One year's "freedom". Please assist me in getting what's mine.

On April 11th of 2014, I was finally released from prison after 3 years of being held captive by means of the state under conditions that were a violation of my civil rights, on the pretext of a "crime" which was in actuality quite obviously not a violation of the law or even standard practices on the Internet.

I was kidnapped from the place of my birth. I was beaten. I was subject to forced starvation. I was subject to months of confinement in a special housing unit, the cognitive effects of which I am dealing with on a day to day basis. My lifestyle and livelihood have not been returned to me. Despite my best efforts, the government refuses to compensate me for the wrong that it did to me, the harm of which continues on a daily basis. Of course, the torture was not enough. They had to continue violating my civil rights even after I got out of prison in an attempt to financially strangle me to death, thus forcing me to leave the country to start doing business:

Racked some 1us for TRO LLC rack last Wednesday and now these sit right near em. Feds working fast these days! pic.twitter.com/UZ3lYwuP5D

I invoiced the ringleaders of this criminal conspiracy, Susan Wigenton, Zach Intrater, Michael Martinez, Paul Fishman, and Christian Schorle for the time they stole from me. I don't expect punitive damages or pain and suffering. I just want the 3 years it stole from me to be paid up at a reasonable hourly rate, so I can buy myself a new citizenship and home and forget about the United States.

I write to ask for help from those in the nationalist and activist communities. Judge Susan D. Wigenton's home address and phone number are now a part of public record since her formerly disbarred husband1 is now operating a law office out of them2. If you could please give her a call, or even better drop by her home and kindly remind her that she owes me a debt that she has yet to pay, I'd appreciate that a lot.

1Funny story: he took a five figure amount of his client's money in escrow and used it to pay gambling and prostitution debts. Somehow he not only avoided prison time for this, but was allowed to return to the practice of law. I met people in prison on the same offense over comparatively paltry four figure sums. Being the husband of a corrupt judge is pretty nice it seems!
2 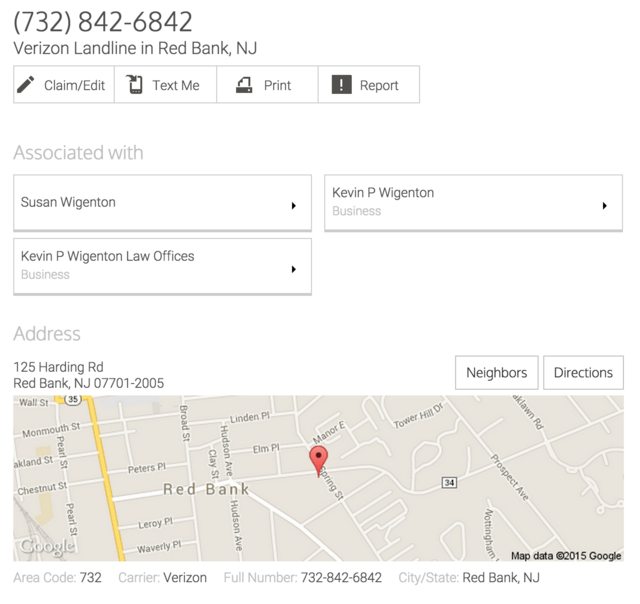