"Women in tech", doxing, Kathy Sierra, and the koolaid.

We must differentiate between "women in tech" and women making tech. There are many self-proclaimed "women in tech". A representative member of the "women in tech" community has no useful free software contributions, a series of non-technical job roles at insignificant companies, no successful investments, no notable hacks to their name, and a very big attitude. The role of "women in tech" in our ecosystem is that they are women, and that they are in an ancillary position to people making technology. Also, they are always victims. Their stream of blogs and tweets about their daily victimhood at the hands of men is constant. I count among my circle of friends women who fled abusive arranged marriages in Islamic countries, and yet somehow their experiences as victims of a patriarchy are less defining to their character than these "women in tech".

Those are different from women making tech. Of the three best hardware hackers I know (really hard to call the absolute best in matters like these) two are women. Few in my community make science that will be cited in a hundred years. Of the two I personally know remaining that have, one is a woman. There are so many women making tech that I'd have trouble counting them all. They communicate to me that they are embarassed by "women in tech". The endless calls of feminist activists and professional victims to have gender quotas enforced has lead to the terrible side effect of people asking women making tech to be speakers and on panels related not to their achievements in research or industry, but on "women in tech". As their research is generally top-tier, I feel for them. Maybe there is some terrible male privilege. At least I've never been asked to be on a "men in tech" panel.

Yesterday Kathy Sierra (a.k.a. seriouspony), a mentally ill woman, continued to accuse me on her blog of leading some sort of harassment campaign against her by dropping her dox (information related to identify and location) on the Internet. Now there are two questions to answer about this. The most illuminating question: "is what Kathy Sierra experienced, judged by the standards applied to everyone else, any kind of harassment?" Doxing is common on the Internet. Let's take a look at other instances where people had dox dropped and take a look at the response from the "women in tech" community, as well as the liberal media.


The message from the media and the "women in tech" is clear. Dropping dox is not just acceptable, but encouraged, as long as the person targeted is a white man with opinions they dislike. I can't believe I am the first to say this, but you can't fucking have it both ways. Attention "women in tech": not a single one of you have experienced the kind of community backlash that was meted out to say, Ryan Russell, or Dan Kaminsky. And I receive threats of violence from the social justice community on a near daily basis. Rare is the controversial public figure that doesn't. I don't sob about them in public, because hey, it's the Internet and I am not a histrionic nutjob.

Now, I believe in equal rights for women. Second wave feminism, sign me up. Tech is the most meritocratic place I have ever seen. I work with transgendered minorities. I work with people of many races. In tech nobody questions you if you are a black genderqueer midget. The only question that matters when you present research is, "can you hack?" With equal rights comes equal rigors. The "women in tech" crowd have personas that can't survive the same intense public criticism that men receive. So they demand a neutered sphere of public debate where they can denounce legitimate criticism as misogyny. Recently we got to see exactly what seriouspony's lynchmob of social justice warriors consider "harassment". We got to see what specifically drives people like her to quit social media in a tantrum. It happens to include civil disagreement, as witnessed by this Forbes reporter:

Weird to see @ErrataRob being blamed for harassing @seriouspony off Twitter. She engaged him and he responded civilly and rationally.

If the only input you can accept is praise and agreement, being a public figure is a bad job for you. You are more emotionally suited to a job with less emotional rigors, perhaps working with very autistic children.

Now comes the question of "did I drop Kathy Sierra's dox". I've denied it for years now, but let's go take a look at where they were dropped and not take my word for it. They were posted on a public mailing list called full-disclosure. I'm not going to link to the archives on marc.info that have the complete emails with headers because the last time I tried to present this evidence Sierra had my Twitter account suspended. Funny given that she just lied in a public statement claiming she never wrote any takedown notices to stifle criticism.

On mailing lists, you can see poster's email addresses:

Given that the person in question made his post under his real e-mail address someone immediately, inside the thread in question, takes the e-mail address, plugs it into Myspace search, and finds the poster's Myspace profile: 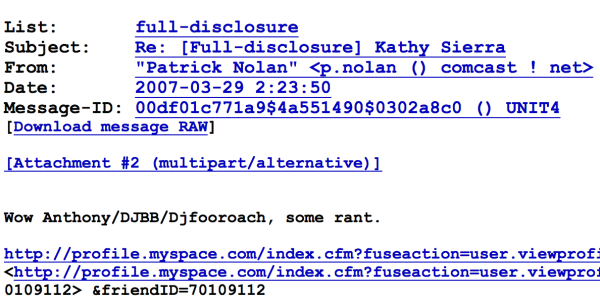 Internet detective 101 here. Journalists can try looking at evidence in the future, instead of trying to create celebrity targets for crucifixion. Matt Schwartz, of course, attached a number of absolutely ridiculous claims to the New York Times magazine piece where he falsely claims I made that post. Not the least of which is that I held people's kids for ransom. He has even less integrity than Stephen Glass. That he is cited authoritatively is indicative of how little the "social justice" crowd cares for truth.

We have created a culture where a "vulnerable" minority can accuse a white man of anything and he will be publicly crucified regardless of his innocence. Now white men are the vulnerable minority.

I don't think anyone in the whole technology community has not benefitted from Michael Arrington's benevolence. Yet when a lone nutjob falsely accused him of rape, his friends were nowhere to be seen. They were all so terrified of a social justice lynchmob that they remained silent. It didn't matter that all his previous relationships with women were positive, a single accusation ruined the man's life. Everyone eventually found that the accusation was false, the women was literally schizophrenic and on anti-psychotics, and the accusation was leveled in retaliation for him daring to leave her. His vindication was barely even a news story, while his lynching was front page news everywhere. Meanwhile a "vulnerable minority" in the tech industry actually commits an act of rape and gets four days in jail, with near-complete silence from the media. This is how our community works now. I don't blame Arrington for abandoning the Bay area. Those people celebrate degeneracy.

Kathy Sierra has for years acted like a toddler, throwing tantrums and making demands whenever things didn't go her way. She rejects any presentation of polite criticism or presentation of evidence as some sort of assault on her. She was the blueprint for women like Zoe Quinn and Anita Sarkeesian, who also feign victimhood for financial and social gain. Kathy Sierra is the epitome of what is wrong with my community. She had something coming to her and by the standards set by her own peers in the social justice community, there was nothing wrong with what she got.

I do not hate women. My colleagues include quite a few (cis and trans) women. I support women making tech. However, it is high time for the "women in tech" to get the fuck out.
Subscribe