People outside the technology industry don't quite understand the scope of Ian Murdock's contributions to the world. The internet is a big place. It has about a hundred million servers on it. Of those hundred million, about twelve percent are running Debian, Ian's distribution. After Slackware 8 came out in 2001, I switched to Debian and have been running it on my infrastructure since. Beyond servers, the most popular GNU/Linux system distribution for the desktop is called Ubuntu, and it is just a friendly face on Debian's software.

By scope of deployment, Ian Murdock was one of the biggest contributors to the Internet in the world. Bill Gates and Linus Torvalds have shipped more widely deployed software, but Ian Murdock certainly exhibited a scale of contribution that approaches their level.

Over the past week Ian had his home invaded without cause. He was kidnapped at gunpoint and falsely charged with assaulting the officer who assaulted him. He subsequently committed suicide. Many people are commenting that he wasn't in a lucid state when he did so. I'm not so sure. His chances of seeing a California prison were very high. California state prisons are the worst in the entire western world. His chances of losing a significant bit of his assets to the state were also high. Ian had a lot of assets. Rather than endure torture in prison and a loss of his assets to those that were wronging him he killed himself. He was also hoping to catalyze retaliation in revenge against his tormentors, and his death will mean nothing if we don't make it so. 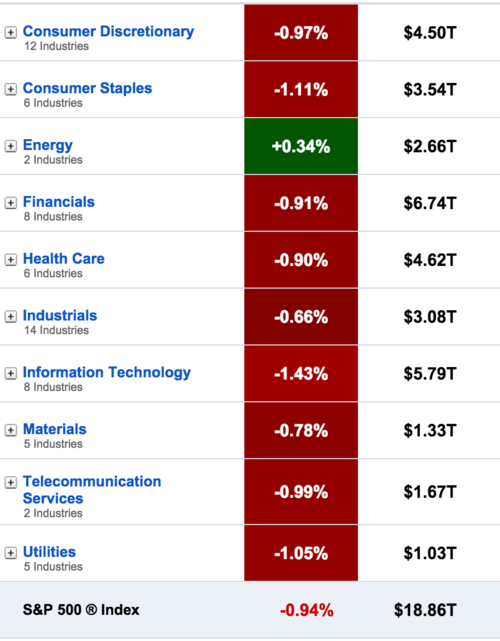 This is a chart of various economic sectors and the total market cap of the associated companies. As you can see, of all the major sectors only financials exceed computing in value. I'm going to say pretty confident that none of them exceed computing in actual social contribution. In fact, with the exception of healthcare none of them innovate at all any longer. This year, the Cybersecurity Information Sharing Act passed. It was regarded as a terrible thing and opposed by the entire computing industry. It passed anyways. Computing is twice the market value of the energy industry. When is the last time a bill universally opposed by the energy industry has passed? Never. Such a thing is unthinkable. It does not happen. Utilities is the smallest sector on this list with a fifth of computing's value yet has a gigantic multiple of its political power. Computing is regularly made the bitch of the media industry through legislation, which is too small to even appear in this chart.

The food/staples retailing industry is very small in comparison to computing, but I quite assure you that in my homeland of Northwest Arkansas, the cops have a record of every family with a Walmart executive in it and they know damn well better not to fuck with them. Even a low level Walmart executive isn't going to get beaten, humiliated, and falsely charged in the Ozarks. It simply won't happen because the cops know who runs that place. In contrast, one of the most important contributors to computing on the earth just had that happen to him in San Francisco of all places. The telecom services industry is relatively tiny by comparison to computing, but it still petitioned the government to violate my rights and the protests of the entire computing industry did not prevent it.

Ian is dead for the same reason Lance and Jonathan and Aaron are: computing, as an industry, has no will to power. Computing is filled with nerds who want to focus on their own shit and think politics is stupid. They are right, politics is stupid, and I shared a little of that attitude up until the point a gun was pointed in my face, my home was reduced to rubble, and I was being beaten and starved in solitary confinement. Computing's lack of will to power is especially tragic not only because it has the highest potential for power, but because the big players of the game realize that it does. Regardless of the apolitical nature of the industry it is being dragged into Marxist struggles anyways.

maradydd has a brilliant analysis of the feminist part of the cultural Marxist ecosystem that has now turned its eye towards the technology industry, but her reduction of cultural Marxism to a simple protection racket is flawed. Feminists are not the only force agitating against the tech industry, and immediate profit from their protection racket is not the primary motive.

The other thing that happened over the past week is that anti-fascists (antifa) were out in force at Chaos Communications Congress. If you are unfamiliar with the CCC, it is the most prestigious gathering of hackers in the world. It is not something done for profit, but for the exchange of ideas amongst hacker luminaries. Unlike feminism, antifa has no profit model in this space, and even if it did, the CCC is not a well capitalized company. It is a loose association of hackers.

Antifa at CCC took the chance to protest emerson's talk as racist. I might be a white nationalist and have been so in public since 2008, but if I were to give a talk at CCC I don't see how I could even make it racist. These are technical talks about real world software deployments. The talk itself was about emerson's travels to Sierra Leone at great personal risk to help use open source software to assist with the eradication of the Ebola virus. Why would they choose this talk?

Let me tell you something. I, as a public white nationalist, have never had problems with these people. Nowadays they are afraid to even say my name. I am Voldemort-tier:

I'll tell you why they chose that talk: someone who goes to Africa to try to help 3rd world people not die is more likely than a white nationalist to cower their head in accusations of racism. They are looking for easy victims to create a narrative with. Their bonuses depend on it.

As it turns out, there is an economic interest in keeping the hacker community docile, afraid, and Balkanized. The last term is best because it is the same guy that catalyzed the genocides in the Balkans who funds most antifa groups: George Soros. Just as he funded the destruction of Yugoslavia because the unification of Slavs presented a threat to his geopolitical interests, he, along with the Rothschilds and the Weinsteins, now funds attempts to culturally subjugate the hacker community. You know that chart we look at above? They are desperately attempting to keep the political elements of computing subdued by Marxism because a rebalance of power according to value would be against their interests and for yours. Most of these antifa types are paid shills, but a few of you are honestly fooled. You are being cuckolded, advocating directly against the interests of your own community and for the interests of predatory billionaires. When you push leftist and libertarian rhetoric you are screaming for more corpses of men like Ian, Lance, and Aaron.

There's a table that all those other people eat at, and they don't want to clear a seat for your tribe at it. I learned something in prison: if someone takes your seat at a table, you pick something up and bash them with it repeatedly. Ian's death was a result of an act of disrespect and violence, an extension of continual disrespect that has emanated from the power establishment for decades now. It's going to continue until we respond in kind.

Embrace the will to power. We can seize it. It won't take very many of us.